Archive for the category “Marco Rubio”

‘Now aside from the dispirited copy (who writes
this shit?!), the opening shot of
Morning/Mourning in America is actually
Vancouver British Columbia, Canada’.(1) 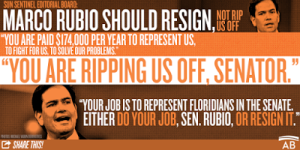 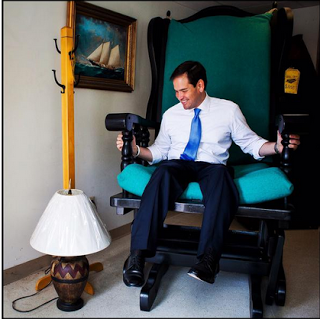 Update : Senator Marco Rubio on why he missed vote :

“Look, I’m running for president,” Rubio told Dickerson in Dubuque, Iowa ahead of his town hall.

‘Sen. Marco Rubio “missed Friday’s Senate vote approving a massive $1.8 trillion end-of-the-year spending bill and tax package — a day after he suggested that he would try to slow the legislation down,” The Hill reports’.

“The Florida Republican, who is running for president, was the only 2016 contender to miss the vote, which is the Senate’s final vote of the year.”

The Republican Child In The Room – ‘Marco Rubio: 9/11 terror attacks were part of God’s plan for the universe’

Real things happen to real people and making the excuse the it’s “God’s will” doesn’t do anything for real people.

Put your flag and Bible down and actually help.

“We are biblically ordered not to be afraid,” Rubio said. “You know why? Because God is telling us that no matter what happens, ‘It is part of my plan. I will give you the strength to endure it whether you like it or not.’”

“The question was how could God allow these bad things to happen? It always challenges us to understand that God’s ways are not our ways”.

“What we may interpret as bad, and most certainly is in the case of Paris or 9/11, even that is part of a broader plan for the universe and for our lives that we are just not going to know the answer to”.

“God’s ways are not our ways.” 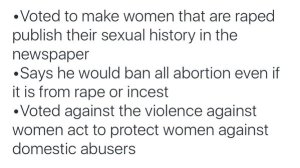 ‘Though he offered up lawsuits as the remedy for unequal pay, Rubio is against the Paycheck Fairness Act because it would result in more lawsuits.

‘When asked by members of the work/family organization Make It Work why he has voted against the Paycheck Fairness Act multiple times, Republican presidential candidate Sen. Marco Rubio (FL) indicated that the gap shouldn’t even exist today’.

“It’s already illegal to pay women less than men,” he responded. “If I pay a woman less than a man for the same job, it’s illegal now. You can be sued now.”

“The Paycheck [Fairness] Act, all it did was allow trial lawyers to sue,” he said. “The reason I voted against it is because…all it really did is just help lawyers sue.”

I guess calling Mexicans murderers and disease carriers, calling for a data base and ‘watching’ Muslims, mocking a disabled man and insisting that ‘thousands’ of people were dancing in the streets in New Jersey on 9/11 when it never happened……is beginning to catch up with him.

Will it affect his core supporters?
Very little.
They hate anything and anyone that isn’t them so Trump speaks to that hate.

Who in the Republican party’s stable of candidates will/can raise up to replace him? 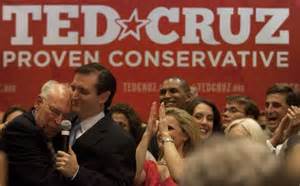 If you think Trump preaches hate…..give a listen to Ted’s dad…. 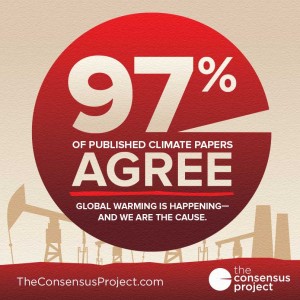 There is no one to fill the void if Trump falls so when the Republican base doesn’t care about his lying, he could still win by default. 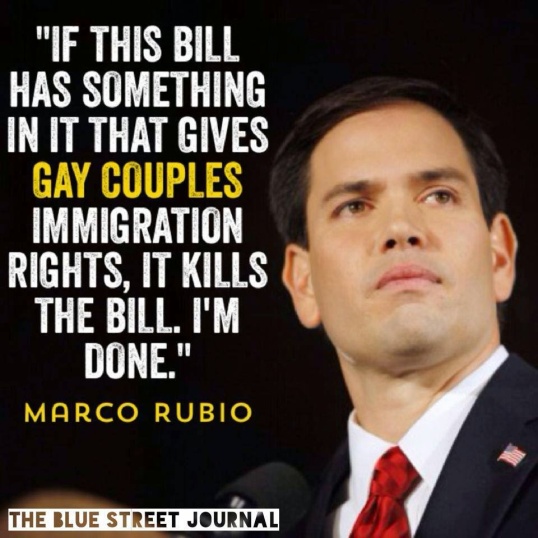 Preach the gospel in schools…….

Deny women the choice for an abortion……

‘During an interview with the Christian Broadcasting Network, GOP presidential wannabe Marco Rubio pandered to conservative “Christians” by basically telling them that they can ignore any laws they don’t like as long as they can find a biblical reason to do so’.

‘Rubio specifically took aim at a woman’s right to choose, expressing his desire to see women lose their constitutional right to have an abortion’.

“It’s current law; it’s not settled law. No law is settled. Roe v. Wade is current law, but it doesn’t mean that we don’t continue to aspire to fix it, because we think it’s wrong.”

“In essence, if we are ever ordered by a government authority to personally violate and sin — violate God’s law and sin —”

“if we’re ordered to stop preaching the Gospel”,

“if we’re ordered to perform a same-sex marriage as someone presiding over it”,

“we are called to ignore that. We cannot to abide by that because government is compelling us to sin. So when those two come into conflict”,

What is wrong with these people?

‘When Republican presidential candidate Sen. Marco Rubio was asked by Chris Wallace on Fox News Sunday if he thinks his “foreign policy credentials” are giving him “a boost with voters” after the terror attacks, Rubio responded’:

“I obviously am not happy about the events that happened last week in Paris”,

“But I think it’s a positive development….”

The Stupid Party – ‘Rubio Trumps Trump: Shut Down Any Place Muslims Gather To Be ‘Inspired’ — Not Just Mosques’ 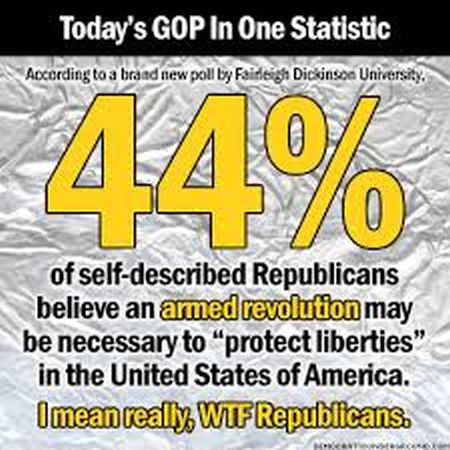 “The bigger problem we have is our inability to find out where these places are, because we’ve crippled our intelligence programs, both through unauthorized disclosures by a traitor, in Edward Snowden, or by some of the things this president has put in place with the support even of some from my own party to diminish our intelligence capabilities.”

“So whatever facility is being used — it’s not just a mosque — any facility that’s being used to radicalize and inspire attacks against the United States, should be a place that we look at,” he continued’.

How long will it take Rubio to blame Obama for not keeping Congress informed?

“The absence illustrates how Rubio is not just missing floor votes but also key hearings on national security and foreign policy — issues he has presented as chief credentials of his presidential campaign. He’s also skipping a Paris briefing this afternoon for all senators. His office said he attended an Intelligence Committee meeting on Paris held Tuesday.” 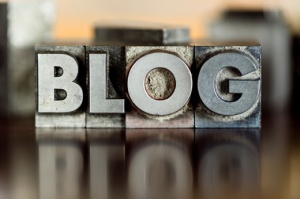 ‘The defining moment of the debate was a heated exchange
over the practicality of Donald Trump’s proposed
deportation of 11 million undocumented immigrants. John
Kasich, and then Jeb Bush, denounced the plan while Trump
stood his ground. Ted Cruz later joined in defense of
Trump’s position. Marco Rubio wisely stayed on the
sidelines’.

‘Trump won the exchange because he appeals to so many
Republican voters who have lost patience with the
“practical” solutions offered by establishment politicians.
Immigration highlights this political divide nicely, but it
was found in many other issues during the night, such as
tax policy and trade’.

‘Overall, Trump had his best debate yet and was the clear
winner. The establishment should be very worried. He’s a
real contender for the nomination’. 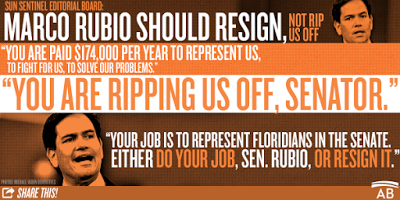 ‘Rubio and Cruz are both very good debaters and spoke
directly to their supporters. It’s not a mistake they’re
slowly moving up in the polls’.

‘Carson succeeded at downplaying questions into his
personal story over the last week but was very shaky when
it came to foreign policy’.

‘Bush was forgettable, which was sadly an improvement on
his last debate’.