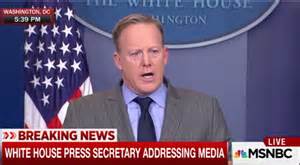 He also expressed objections to specific Twitter posts from journalists. And he said, “we’re going to hold the press accountable,”

***”This is the first time in our nation’s history that floor coverings have been used to protect the grass on the Mall,” Spicer said, claiming that this “had the effect of highlighting areas people were not standing whereas in years past the grass eliminated this visual.”
—‘In fact, coverings were used for Obama’s second inauguration in 2013’.
______________________________

***’And Spicer said, “We know that 420,000 people used the D.C, Metro public transit yesterday, which actually compares to 317,000 for president Obama’s last inaugural.”
—‘Spicer’s number for ridership on Friday was actually low — the correct number, according to Metro itself, was 570,557. But there were actually 782,000 trips taken for Obama’s second inaugural in 2013′.