The Face and Voices of Dumbshits – ‘Beneath Cheers at Donald Trump’s Rallies, Dark Fears Take Hold’ 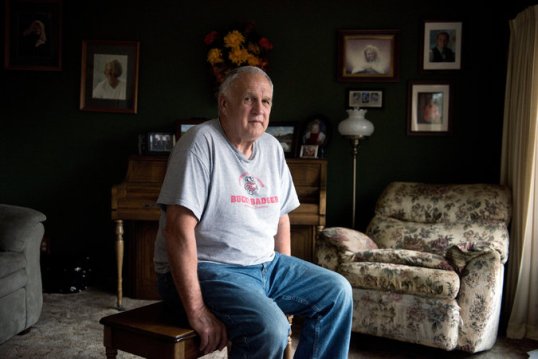 Roger Pillath, a Trump supporter, at his home in Coleman, Wis. “It’s not what I’m going to do,” he said of what might happen if Hillary Clinton wins, “but I’m scared that the country is going to go into a riot.”

Trump supporters take stupid to a whole new level.
If you had any knowledge or awareness, even casual, of past elections, we are experiencing nothing new.

The only difference is Trump supporters, having been fed lies, believe only they can save ‘Merica.
This is a perverted extension of the teabaggers ‘take their Country back’.

But judge for yourself.

‘Jared Halbrook, 25, of Green Bay, Wis’.
“People are going to march on the capitols,”  (We have more then 1 Capitol) said Mr. Halbrook, who works at a call center. “They’re going to do whatever needs to be done to get her out of office, because she does not belong there.”
“If push comes to shove,” he added, and Mrs. Clinton “has to go by any means necessary, it will be done.”

Says the guy who works at a call center………

“It’s not what I’m going to do, but I’m scared that the country is going to go into a riot,” said Roger Pillath, 75, a retired teacher from Coleman, Wis. “I’ve never seen the country so divided, just black and white — there’s no compromise whatsoever. The Clinton campaign says together we are stronger, but there’s no together. The country has never been so divided. I’m looking at revolution right now.”

‘Paul Swick, 42, who owns a moving business, went with his wife and daughter to see Mr. Trump speak in Green Bay last week. Mr. Swick considers himself a “Bible Christian” and “Thomas Jefferson liberal,” and said he hoped to beat Mrs. Clinton “at the ballot box.”

“If she comes after the guns, it’s going to be a rough, bumpy road,” Mr. Swick said’.

Paul…..you just spent 8 years having the NRA and every Republican politician with a mouth tell you Obama was ‘A Coming For Your Guns’.
Never happened did it Paul.

But the great news is the NRA and Republicans want you to be afraid. It’s so much easier to manipulate you.

‘Alan Weegens, 62, a retired truck driver in Colorado Springs, also wondered aloud how the country — with so many citizens who own guns and, he said, “are willing to trample a grandma on Black Friday at midnight to save $5 on a toaster” — would react if Mr. Trump lost’.

“I am not going to take my weapon to go out into the streets to protest an election I did not win,” Mr. Weegens said, “but I think that if certain events came about, a person would need to protect themselves, depending on where they lived, when your neighborhood goes up in flames.”

First of all Alan, only 35% of Americans actually own a gun. A minority.
Of that 35%, 3% own 1/2 of the guns. These are your ture believers, gun nuts.
Now some, a very small ‘some’ of these gun nuts love to go out in the woods and play army. Fighting off the hordes of Black people on welfare tying to loot and rob white people.

The thing in Alan, that’s not what happens in the real World.
The vast majority of people on welfare are white and live in rural Southern States under Republican rule.
As for the ones that like to paly army, one shot at them and they will run to their rabbit holes where all their guns are.

“You go through any neighborhood and see how many Trump signs there are and how many Hillary signs there are, and I guarantee you it’s not even going to be close,” said Bill Stelling, 44, of Jacksonville, Fla. “The only way they’ve done it is by rigging the election.”

So Bill is it? We don’t have to actually vote, we just have to count signs in people’s yards?

Who ties your shoes for you every morning Bill?

Maybe the best one….

‘Julie Olson, a rancher who showed up for a Trump rally in Colorado Springs, said that she and her husband had been through rough economic times in recent years, and that a Trump loss would only worsen their burdens.

“I’d probably go into a depression, because life is hard enough for us right now,” Ms. Olson, 69, said. “And if Hillary gets in, it’s going to be a whole lot worse — income, lack of income, small business, large businesses.”

‘Life is hard for you right now’ because you are getting to the age when you should be retired. Ranching is a physically demanding career. You made the personal decision to go into it and you should have made the decisions to be able to retire.
But go ahead and blame Hillary Clinton for decisions you made.

roger Roger Pillath, a Trump supporter, at his home in Coleman, Wis. “It’s not what I’m going to do,” he said of what might happen if Hillary Clinton wins, “but I’m scared that the country is going to go into a riot.”