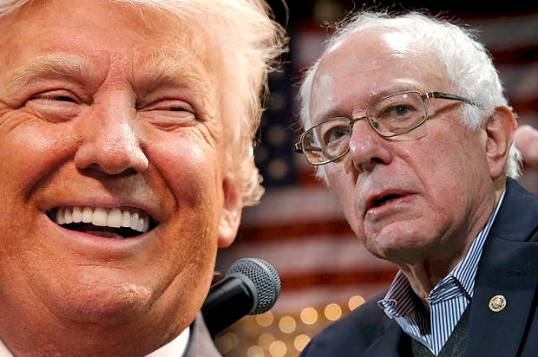 Every single ‘pundit’ review has said that it will ‘elevate’ Bernie as THE Democrat.

Both candidates have proved over and over that they know nothing of policy details so the debate won’t be on actual policy.

Bernie is what 74? By the time Donald Trump is done with him, Bernie will look and feel like he’s 94.

Worse? Bernie will be perceived as representing Democrats and this will make ALL Democrats look weak.

Trump is the master of the insult and bully pulpit.

It’s doubtful this will happen but I hope it does.

Considering all the lies and personal attacks Bernie has made, he deserves a good thumping or ‘Trumping’ – just like the other Republican candidates took.

**On a side note, the only time a ‘Trumping’ backfired was when The Donald tried it on Carly Fiorina.
After the debate, her ratings soared because we, in out hearts find it repulsive to attack, demean or insult a woman publicly to her face.

And that is the reason Hillary will crush Trump in the Debates.
He will attack with personal insults.
Hillary will take the ‘high road’ and stick to policy.
No moderator will risk their career and try to get her to answer a personal attack vs actual policy.
And The Donald will be left sputtering sound bites instead of factual details on policy.