‘Why Big U.S. Retailers Can Afford To Increase Wages’

I worked in retail management for 35 years. The most frustrating part of the job was every fall beginning the fight with corporate to give raises to the people that actually did the work.

As hair pulling as ‘Black Friday’ and the day after Christmas were, they actually seemed like holidays from the fight.

‘By 2020, more than one-quarter of U.S. workers will be working low-wage jobs, not making enough money to keep a family of four out of poverty’.

‘The retail sector takes in more than $4 trillion annually and firms with 1000 or more employees account for more than half of that’.

‘At the same time labor compensation in the sector contributes only 12 percent of the total value of production, making payroll just a fraction of total costs’.

‘Large retailers could pay full-time, year-round workers $25,000 per year and still make a profit – satisfying shareholders while rewarding their workers for the value they bring to the firm. A raise at large retailers adds $20.8 billion to payroll for the year, or less than 1 percent of total sales in the sector’.

‘Meanwhile, “if retailers pass half of the costs of a wage raise on to their customers, the average household will see just 15 cents added to the cost of its shopping basket on any trip to a large retailer. That amounts to an annual cost of $17.73.”
From : http://thinkprogress.org/economy/2012/11/19/1217041/retailers-afford-wage-increase/?mobile=nc

And from The American Conservative :

‘Even a large increase in the minimum wage would have very little impact on America’s international competitiveness since almost everyone employed in our surviving manufacturing export sector – whether in unionized Seattle or non-union South Carolina – already earns far above the current minimum wage. The same is also true for government workers, resulting in negligible increased cost to taxpayers’.
@ : http://www.theamericanconservative.com/articles/raising-american-wages-by-raising-american-wages/

The American Conservative does spend 3/4 of their paper on this type of crap :

“Although our bipartisan elites regularly suggest higher education as the best elixir for what ails our economy and its workers…..’

Can you say Rick Santorum?

We don’t live in a bubble. The rest of the World knows and understands the value of education.

But an argument for another day.

‘The difference between these two on the average retail purchase price change varies from $17.73/year to $106.34/year’.
From : http://www.addictinginfo.org/2012/11/19/studies-on-both-sides-say-to-increase-the-minimum-wage/

We have (created) a ‘spending problem’ by cutting taxes.
Raise taxes and one problem is solved.

Republicans have ignited a national epidemic of deficit and debt hysteria, when in reality these budget issues are easily curable. The truth is the political battle over deficits and the national debt is a proxy for the ideological struggle over the role of government in our modern society. Republicans perpetually promise Americans balanced budgets, reduced spending, and lower taxes. But what they don’t tell us is they’ve engaged in a successful public relations strategy for decades that paints government as the enemy. They’ve redefined “welfare” and “takers” to encompass basic investments in working Americans. Republicans represent extreme corporate interests that want resources allocated away from broader societal investments, and towards a select few at the very top. With a lack of sufficient taxes and public funds, the Republican future is one in which most people would be on their own to try to navigate serious economic, social, medical, and environmental problems… 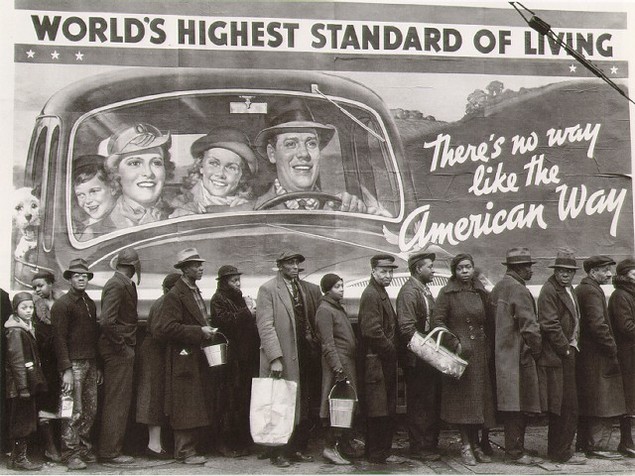 The devolution of America has definitely begun.  Actually it started decades ago, but we are now seeing the pieces fall away.  The deterioration of America’s infrastructure and the steady erosion of the middle class are surely at the forefront of this process.  Through globalization and outsourcing, jobs and money have been stripped away from the middle class resulting in large profits for the elite and powerful.   It has created a state of desperation that propels people to work more for less.  Thom Hartmann has written an excellent article outlining the steps the U.S. is taking to become a third world nation.

New reports that Taiwanese transnational manufacturing corporation Foxconn may be opening up some plants in the United States indicate that our nation has now entered the terminal fourth stage of “third-worldization” or what may be better referred to simply as “recolonization.”

In case you don’t know, Foxconn is China’s…

In 40 years (or less) we will have bidding wars on food and a shortage of fresh water.

Naomi Klein (author of Shock Doctrine) talks to Bill Moyers about hurricanes, climate change and how capitalism, in particular the the fossil fuel lobby, is harming the planet.

Wanna win an election?
Be likable.
CC usually is. Mitt never was.

‘The people who are trying to make this World worse aren’t taking a day off – how can I’? – Bob Marley
If it weren’t for politics getting in the way, I could spend the balance of my life contemplating all the different perspectives life offers us.
GREAT POST!